The core idea is to perturb the video output of a game system using analog components and capture the video feed. That way when the button is pressed, we can see it in the video footage and count the number of frames until the reaction. This idea was first applied by noodalls.

The following picture displays four frames of the video feed we are able to capture. 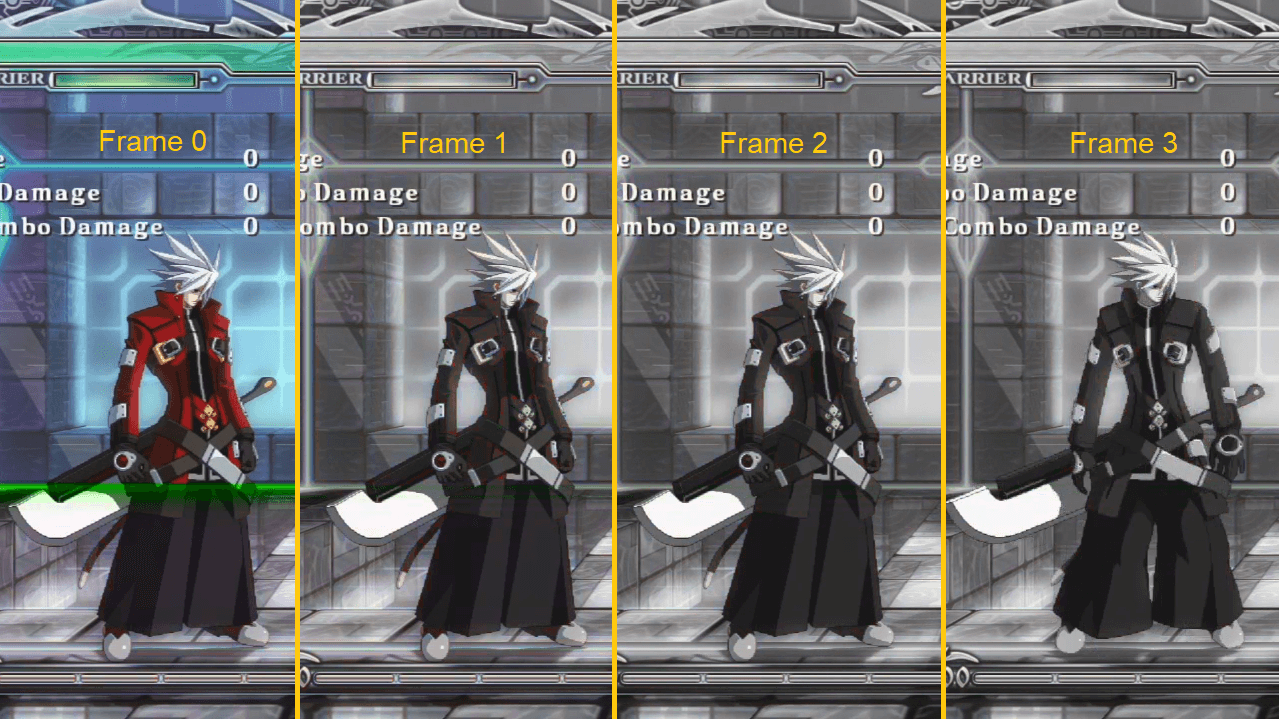 On frame 0, the button is pressed, making the video feed black and white after 67% of the screen being displayed. We know that the button was pressed exactly 10.8ms after the vsync. Now we can count. On frame 3, the character is starting to move. Therefore, in this instance we can say that for an in-frame timing of 11ms we have two frames of additional lag.

There are two metrics that are computed in this methodology:

Due to the way inputlag is defined, in the previous example its value would have been 2.3 frames. While it might seem unfair because in a vsync environment, it is impossible to react before the next frame. However, this is accurate to what the user feels and secondly it shows exactly when the game polls for new data.

The resulting graph that you can get is the following.

The blue squares indicates where the input has been measured, to more the blue is pronounced the more certain the lag is going to be this value. The line plot is the average lag it represents. In this case, around the 14th milliseconds, we can see that the game is reading its inputs. The stability here is nearly perfect, the only time that the outcome is not clear is around the 14th milliseconds again (to be expected because this was made using a USB device which has ~1ms of lag ±0.5ms). 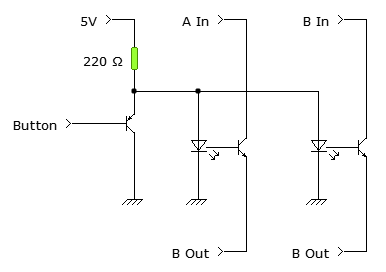 You need to build a small electronic circuit that is able to interrupt an analog video signal. We have had successful results with either a 74HC4053 (2-channel analog multiplexer), or like depicted in the schematics here using optocouplers.

Usually, only two channels are necessary to have a usable interruption as we will see in later sections.

This is far from perfect as you may experience some color changes compared to the original video feed without pressing a button. But the goal is to measure lag not having accurate colors and this costs basically nothing.

The video conversion and capture

The interruption device works only on analog video, however modern devices only output HDMI. Fortunately, it is possible to convert this signal into a YPbPr signal (aka. component video) for a small cost. We have been using the Portta HDMI converters that noodalls has proven to be completely lagless.

Then, you must have a video capture device able to handle the native resolution and frame rate of your device. Fortunately, a lot of capture cards still support component input.

If you need a USB controller, then you absolutely need to make sure that your device is very fast and very stable. Most of the measures we have performed were done using a Brook Universal Fighting Board which is the fastest we know of (~1ms). You also obviously need a controller that has a common ground PCB that you can access to easily.

Obviously, if you can poll the controller as it is read by the target device (like the JAMMA port or the pin of a NeoGeo DB15) this is better.

Here is an example of a completed setup with everything in place for a USB+HDMI system (modern console or PC):

We have detailed that in the previous sections. Here are the signal you need to interrupt:

Connect your button signal to the button you wish to measure.

Launch the game you want to measure. Please yourself in a situation that most ensure those conditions:

It is still possible to make measures without all conditions met, it's just harder to automate.

You have to have a video record without any stutter in the natural resolution and frame rate.

To help you on this, a program has been made to able to do just that. It is part of the inputlag toolset.

4. Press record and push the button plenty of times

By experience, a set of 300 points is the minimum for a decent measure. This usually corresponds to 5min of button presses.

If you don't adhere to these two rules, you will regret it during analysis.

Firstly, you need to make sure that your video feed has a good quality. Open the file in VLC, then using the frame-by-frame navigation (using the e key): find an interruption, and count until you find the reaction frame. This will give you a first estimation.

To have a complete picture of the results, you need the inputlag toolset. This will analyze the video feed and will output a three-column data file: the frame, the scanline of the input, and the number of frames until the reaction frame.

This tool will automate the analysis. However, it needs to be configured on each video feed. The instructions are provided in the README of the tool. Here is a general process to gather clean results:

You may still have a few faulty measures due to the previous conditions not being met. You can still clean them afterwards.

To do that, you may import the produced csv in a spreadsheet software. Then, group your scanlines by groups of 60 (that's the default used on the results section). And finally, create a pivot table with the grouped scanlines and the reaction frames.

The results are way more fair on vsync because this setup is definitely able to detect vsync while it is not (currently) capable of detecting the frame buffer flip. I have a few experiments but it is not ready yet.

Without vsync, the stability will be obviously impacted because if the buffer flip is done at the end of the frame, it will be impossible to detect the reaction frame before the next vsync.

The main alternative method is filming the screen with a high-speed camera. There are a few issues in this method:

Thus, it is normal if the input lag measured using the camera-method is a frame slower

The sensor method is an improved way of measuring using the camera-based measure. It requires a bit of hardware to measure the light quickly and some software to fetch this data and measure it against the actual value.

Two main devices come to mind in this category, the Ben Heck's Controller Monitor Rev 2, and the NVIDIA LDAT (similar to NVIDIA Reflex methodology). The idea is simple on paper:

When it comes to comparison with the presented method here we have the same issue as the camera-based measure: display lag is included. So, it has to be taken into account in the final result and position of the sensor matters a lot for a sub-frame result.

Furthermore, this method has the issue of requiring a big luminance change on the situation you want to measure. If you are a game developer, you can modify the game to display a large white/black rectangle. Otherwise, you have to find an animation that triggers the flicker needed (like a gun fire).